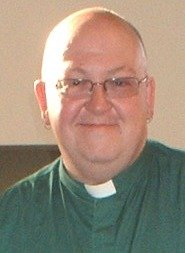 The senior leader at St Nicholas’ is the Vicar, the Rev David Green. David was Licensed as Vicar here in May 2010 after serving for four years as Vicar of St Paul’s Peel, Little Hulton, in the Diocese of Manchester. Before that, he was Curate of St George’s Huyton in Liverpool from 2002 until February 2006, where he worked alongside an experienced Vicar. He was ordained as a Deacon on the 30 June 2002 in Liverpool Cathedral by the Bishop, the Rt Rev James Jones, and was ordained as Priest the following year on Pentecost Sunday. David trained for ordained ministry at Cranmer Hall within St John’s College, Durham, which is part of Durham University, where he gained a Diploma in Ministry and Theology with credit. David was born at Mexborough Montagu Hospital on the 17 April 1961. He lived most of his life at Denaby Main to the West of Doncaster. He attended Rossington Street Junior School in Denaby before moving to Conisbrough Northcliffe School at the age of 11. A graduate of Sheffield City Polytechnic in 1990, David undertook further study at Doncaster College and Sheffield Hallam University gaining an adult teaching qualification at Doncaster and a Post-Graduate Diploma in History at Sheffield. David was a Tutor at Doncaster College for six years, teaching English Literature and Social Sciences to adult students returning back to education. He later worked as a Civil Servant in Barnsley before spending a year working for Conisbrough and Denaby Credit Union. David’s interests include football (he supports Sheffield United), church and social history. He enjoys travelling to the Greek Islands for holidays, with Rhodes Town and Corfu Town being his favourite resorts. David loves sharing his faith with others and longs to see more and more people here in Thorne come to experience the love of God for themselves and the close friendship of God’s Son Jesus in their lives.